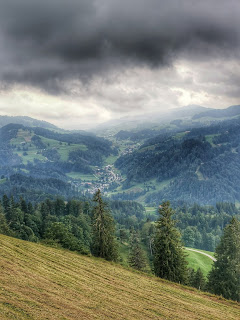 Knowing that I would hike along the Apennine mountains for almost three months in Italy I did not have much ambition for alpine hiking trails in Switzerland. I decided to skip the Alps as much as possible and chose the fastest and shortest traverse through Switzerland: the E1! This is the view from Hörnli, with 1133 meters the highest mountain so far. And as you can see the weather turned bad. When I descended the mountain in pouring rain I came across a litte stone hut expecting to find it locked. It was not only open, but a first class toilet where I could wait out the rain and even charge my cell phone and enjoy heating. When I discovered that even in expensive Switzerland there are chocolate bars for less than 1 Euro I was reconciled with this country.

The E1 follows a pilgrimage trail and leads through Einsiedeln, famous for its monastery. I liked the cheap pilgrims' hotel best were I stopped for a rest day to wait out the torrential rain - perfect timing! 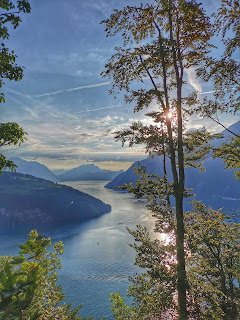 I left Einsiedeln in sunshine and was overwhelmed by this view of Vierwaldstätter See! But not all was well that day! I had planned to sleep in one of the open shelters along the trail which are built for barbecues and picnics. Unfortunately two Swiss guys on mountain bikes had had the same idea and were happily enjoying there barbecue when I turned up. Jugding from the amount of meat and beer this was going to be a long night for them - I decided to hike on. It was almost impossible to find a flat spot in this steep terrain and I nearly despaired until I found a sloping spot in a meadow. There were even signs nearby saying: Do not stop! Beware of rockfall! I did not sleep well that night ...
Views of the Urner See were downright spectacular next day but unfortunately there was not much space along the lake side. Mostly I had to walk right next to a very busy road and even through a long tunnel where traffic noise was horrible! 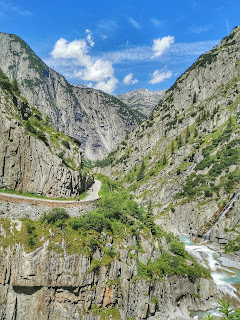 The E1 now starts its long ascent up to Gotthard Pass. Originally a lovely route it is marred by the fact that two (!) motorways and a train line is running parallel to the E1. I admired the engineering skills but the constant noise was nerve wrecking. Still I was surprised to see literally hundreds of racing bikers climbing up to the pass. They can do it in one day, I had to find accommodation because wild camping seemed impossible here.
Things got a lot better when the main motorway disappeared into the long Gotthard tunnel. After 1,5 days of ascent I finally reached Gotthard pass at 2100 meters looking forward to long descent on the old cobblestone pass road called Tremola. I descended late in the day when all the cyclists and tourists were gone - what a delight. I was now in the Italian-speaking part of Switzerland walking the Strada Alta, the old "high road" above the Ticino valley. 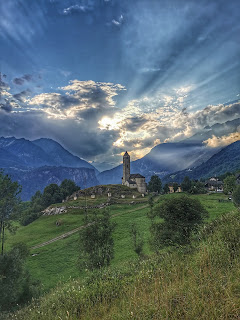 The weather was now changing between sunshine and thunderstorms allowing me to take this incredible shot of a village church. I nearly missed it - I only turned around incidentially to see "God's fingers" behind the church.
Again finding a campsite in the steep terrain turned out to be a problem especially with thunderstorms threatening all the time. Although I was far away and high above the valley I could often hear the traffic noise. When the E1 finally descended into the valley and runs next to the Ticino river the motorway is only 100 meters away! Lovely scenery, horrible noise!
But after Bellinzona the E1 climbs up another ridge and leaves the noise behind. I could even see Lago Maggiore in the distance!
The E1 crosses Lake Lugano on a ferry that unfortunately only runs in the mornings and evenings. I did not want to be stuck in an expensive Swiss town and made little detour around the lake - in pouring rain. Rain gear is not very helpful in this temperature - I was getting wet from inside and outside!
It took me only 10 days to cross Switzerland from North to South with Gotthard being the only serious pass. There are definitely more spectacular routes in Switzerland but I still enjoyed this one - except for the traffic noise! It is a nice trial tour to get a good overview over what Switzerland has to offer - and then come back to explore more deeply.
On July 24th I finally crossed into Italy in Ponte Tresa.
Eingestellt von German Tourist um 23:43