Germany to Italy: Norcia to L'Aquila 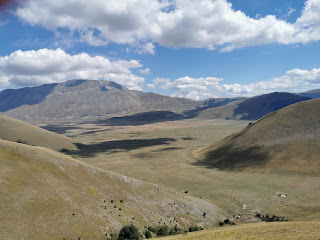 Back in the Monti Sibilini I was overwhelmed by the vastness of the landscape. It all looked very serene - but when I reached a road and the rifugio there, it had been destroyed by the earthquake. The hut warden was now serving food in a container nearby.

Camping that evening I hid in a forest well out of sight of the nearby farm. Nevertheless at dusk I heard people's voices nearby and two dogs sniffing out my tent - luckily not barking. When the voices came closer I finally summoned up my courage and looked out of my tent: A couple was standing just five meters away discussing something in English - not having discovered me yet. 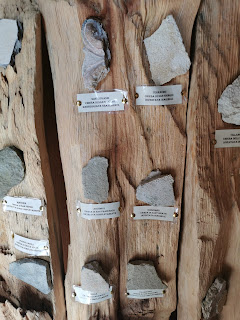 All of a sudden the conversation stopped and the lady said: "I think there is a tent!" I immediately introduced myself and offered to leave - but no problem. The couple turned out to be from the Netherlands. They were about to buy the property and were now exploring all the nooks and crannies before signing the contract. "You can stay here as long as you want - and we won't tell the owner", they told me when leaving. Later that night I was only disturbed by a wild pig.
The next village, Accumoli, had been completely destroyed by the earthquake, people were still living in containers, even the village church was a container now. Next to the altar was a crucifix with a sign "our Golgatha" where rock pieces were exhibited: They were pieces from the destroyed village churches in the region, a very touching memorabilia.
When I tried to shortcut some kilometers I ended up on a road that had been destroyed as well - but unfortunately now there were two big constructions sites with several "No entry"-signs and lots of workers. Although I felt pretty bad walking right through it nobody said a word. On the contrary some workers chatted with me about my hike! 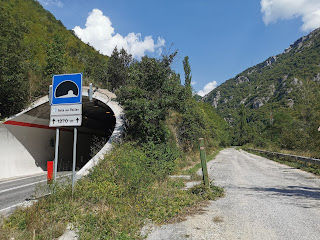 I tried to follow the E1 but ended up in an unpenetrable jungle of blackberries - the last hiker must have come through here years ago! I had no choice but to road walk around it. What really worried me was the fact that I would have to go through a very long tunnel, a potentially dangerous situation for me as a hiker. But to my great surprise the old road existed still next to the tunnel and was actually the new E1 route! But my luck did not last long: The E1 led me to another bushwhack were I cut my leg so badly that blood was running down my calf! The other choice was roadwalking again on a busy narrow road that sent me jumping into the ditch whenever a truck approached. 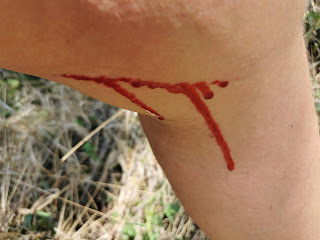 I realized that the E1 is definitely a work in progress and its route not reliable! I still made it to Antrodoco in one piece where I took the train to L'Aquila where I had booked a room in a monastery. Although the earthquake there had taken place more than ten (!) years ago the city centre has still not been rebuilt. What a shame for the Italian government. I had to take the bus to some suburban shopping centre to do all my shopping.