Germany to Italy: Pistoia to Faenza 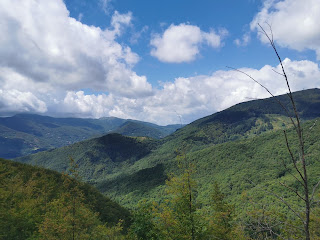 Luckily I had arrived very early at the bus station because due to Corona only 50% of the seats were supposed to be occupied - but there were a lot more passengers waiting. But after long discussions Italian style everyone got on board. It took 1,5 hours to cover 30 km as the crow flies and I felt horribly seasick after plenty of taking over manouvers on the narrow and winding road. It started to rain as soon as I got of the bus and with thunderstorms lurking I took a lower alternate route. Good choice because the next day all summits were covered in thick fog. 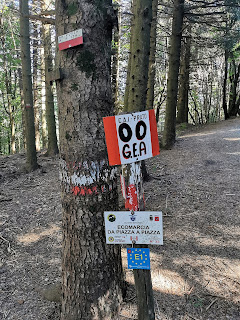 I learnt a new Italian word: "frana" which means landslide. I had to do an iffy detour to get around one but could rejoin my route via old abandonded roads that let me progress quickly. I am now on the Grande Escursione Appenninica which felt a bit like the AT: a long green tunnel! (with little water!)
I was lucky to reach a refuge where I could get water out of a cistern and a lovely chat with the hut warden who told me about this crazy Corona year: first no tourists and then too many!
On Passo de la Futa the popular Via degli Dei joined the GEA for a couple of kilometers and I was amazed how many hikers were out there!
There even was a hiker box! Beside lots of band-aids and Ibuprofen I could score some snacks. There were so many noisy hikers piling up at the only spring that I fled from all the noise. But as soon as the Via degli Dei took another turn, I was all alone on the GEA again.
Passo de la Futa is the location of Italy's biggest war cemetery. More than 30,000 German soldiers are buried here. Often they could be identified. When I wandered through the endless rows of graves reading the simple name plates of wondered what fates were behind it.

I took the train to Faenza, ceramics capital of Italy where new shoes were waiting for me. I had ordered them from Amazon, and in Italy you can have them delivered to one of their partner stores, in my case a newspaper agent.

Although I had a lovely AirBnB where I could even use the washing machine there was no AC or even a fan in my room. It was so unbearably hot that sleeping was difficult. But around the corner was a great pizza place next to an ice cream parlor - perfect combination! And of course I visited the huge ceramic museum in town.