Sentiero Italia and E1 in Italy: Conclusion and tipps 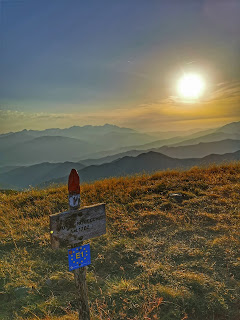 Two long-distance trails are (theoretically) traversing the length of Italy: Sentiero Italy with a total of almost 7,000 km is spanning the entire alpine range, the length of Italy in several variants plus Sicily and Sardinia and is maintained by CAI. The E1 on the other hand shortcuts the alpine range by traversing the Po Valley, has no variants and currently ends in Fortino, although there is already E1 trail in Sicily. It is maintained by the FIE. Both trails use existing paths and often run parallel or close to each other. Where they use popular trails like the Alta Via dei Monti Ligurii or the Grande Escursione Appenninica they are well marked, where they are "stand-alone" their state ranges from brand new fabulous trail to non-existant.

Generally speaking it is European idiocy that there are two separate long-distance trails in Italy and none is "finished" or even close to finished. Instead of joining forces the CAI and FIE are pursuing different plans just because of one fact: Only the FIE is a member of the European Ramblers' Association which organanzises the European long-distance trails. Sentiero Italia cannot be part of the European network because CAI is not a member of the head organization. 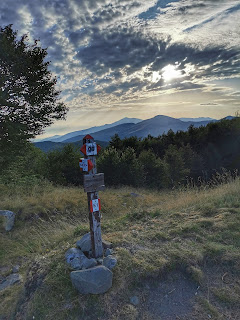 Generally speaking I found the E1 far less developed than the Sentiero Italia. I would not recommend the E1 because it is impossible to thruhike it in Italy! The E1 just does not exist in places and has never existed there other than on paper. One example: At one place the E1 is supposed to cross a broad fast flowing river where there is no bridge or ferry! Only the FIE knows why they routed the trail there ... To find an E1 marker in the mountains is also a rare occasion whereas the Sentiero Italia is almost 90% more or less marked - which does not mean you can hike it there. Often the trail keeper has been the last person through here - sometimes several years ago judging from the state of overgrownness ... 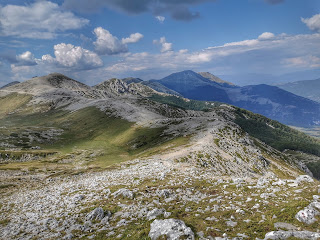 That being said I want to answer the two questions I always ask myself after a long hike: Did I like this trip? Yes, absolutely! This is one of the most stunning hikes of my entire hiking career. I don't know of any other European trail that is so breathtakingly beautiful over such a long distance! For me personally Sentiero Italia is the "sexiest" trail in Europa at the moment. It has everything a thruhikers loves: Incredible scenery, plenty of adventure and a suitable length for a thruhike. It can definitely rival the long US trails, in fact with Corona restrictions and permit systems / overcrowding on the PCT and AT I would rather hike here in Italy than tackling the US trails. 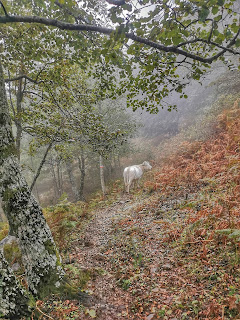 But would I recommend it to a friend? That really depends on the friend's experience and expectations. To make it very clear: The Sentiero Italia is not for everyone! You need plenty of experience in navigation, lots of perseverance and sometimes a machete to successfully hike it. (And you will have a problem if you are afraid of dogs ...) I have hiked on wonderful old cobblestone paths - but also had the worst bushwhacks possibly. You will encounter more cows, sheep, horses and dogs than people. In fact I have not met any other thruhiker on the entire trail. There is no trail community whatsoever and your only source of information is the CAI website in Italian. Forget getting any support from them: They did not even bother to answer my emails ...
At least CAI is improving the trail constantly: Always check with their (very slow) Italian-only website if a section has recently been rerouted! A group of young Italian hikers have founded an organization called Vasentiero and they are hiking the trail each summer, also working on a digital guide - so far Italian only. But neither CAI nor Vasentiero tackle one of the biggest obstacles for a thruhiker: Water! 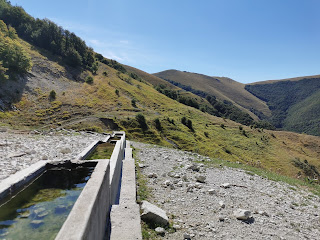 The good new is that there is enough water, at least for thruhiker standards. You don't have to carry more than for one day - if you knew where the water sources are!!!! And that is the biggest problem: OSM maps don't show most of the sources and the ones that are shown can often be dry or turned off. Unfortunately neither CAI nor Vasentiero mention water sources on their website probably assuming that no one thruhikes the trail wild camping style. But even if you stayed in paid accommodation every night it would great to know where each section's water sources are. One good thing is that almost every little village has a public water fountain and on most mountain passes there is a guesthouse, mostly with accessible water taps. 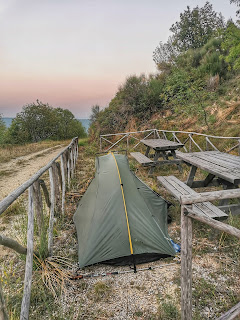 Another good news is about wild camping: Of course, like in most European countries it is illegal in Italy, but the trail runs so remote that finding a discreet spot out of sight is dead easy! And due to the rural exodus there is hardly anyone around who could discover you anyways ... My favourite were the abandoned dry wall terraces and the platforms for coal piles left by charcoal burner decades ago.
Although there are wolves and even bears in Italy I don't think they are a threat to humans: They are too shy! Dogs can be a nuisance, but they are only protective to their herds. If you keep a distance they pose no danger.
Technically the trail poses no real difficulty either, but if you suffer from vertigo you might be reluctant to traverse some knife edge ridges.
One last word: If you are more interested in culture than nature I would rather recommend the Way of St. Francis, the Sentiero Italia avoids towns and civilisation.
Eingestellt von German Tourist um 12:08

Nice to see that you are part of the few hikers on E/1 - S.I. in Italy.
If you followed the E/1 in the first part you "skipped" one of the best segment of the trail in Piedmont: the GTA. On the other side Apennine ridge is wilder and more forest covered.
It's true that E/1 is only partly existent and mostly in the North. I don't think there will be more development in the next years. Now it's also shadowed by Sentiero Italia. Last time I checked SI is almost 8000Kms, with all detours. Only a few (that I know) attempted it in the last years: Lorenzo Franco Santin, Renato Frignani, and nowadays Elio Origoni, also paddling from Sardinia to Sicily.
Va Sentiero guys are following the trail on a multi-year project, trying to rivitalize local communities and inviting people to join them. They are not thru-hikers, they have a support van and mostly they sleep in refuges.
CAI spent a lot of energy on refreshing the original project of Riccardo Carnovalini & Company, but all the efforts seem to push mountain huts and guided tours on stretches of S.I. No attention at those who are the natural target for this kind of long and hard trail: the international thru-hiking community.
Water is always an issue on the Apennines, but it's true that every village in Italy has a fountain where you can refill.
The Way of St. Francis (the "ways", would be better) is a much easier route and you can rely on peregrine accommodation. One of the best camino/cammino in Italy. For those interest in hiking ways there are hundreds of old and rediscovered trails in Italy, many little known.

Thank you, Christina, for great books! I enjoy it very much. Hello from Russia ;)

Great reading, I will send an email to you asking some questions about your experience in the Sentiero. :)