Germany to Italy: Naples to Piaggine

Because the weather did not improve but I was fed up with Naples and its trash problem I want back to Telese Terme where I had left the trail. As the name Terme suggests it is a spa town and I saw myself soaking in thermal baths again. Alas, everything was closed and I was stuck another day in a boring little town with not much to do but go shopping in the only supermarket.

Things improved after that and even the sun came back. Two days later I was rewarded with this wonderful view of Montesarchio. When descending from the mountains on a great trail I came across the Grotta di San Simeone, a cave in the middle of nowhere that was decorated with a 16th century painting of the saint. There is a fence now to prevent vandalism but during WW II this had been a hiding place for the locals.

There is a long road walk across the valley but I found a wonderful "tavola calda" in Montesarchio where I could fortify myself for it. 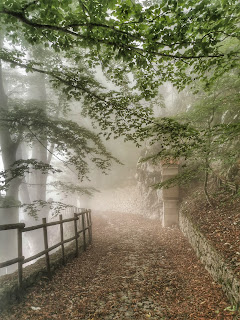 I nearly missed the Santuario di Montevergine because it was so foggy and the building was so modern (and ugly) that I did not suspect it to be a monastery. But then a nun appeared out of the fog and told me about the place. 1,5 million pilgrims visit it every year - almost all of them by car despite this wonderful old trail!

I had big trouble finding a campsite that night: There were plenty of wonderful terraces more than suitable for camping but for whatever reason there were alarm shots every five minutes to scare the birds away! No way I would be able to sleep here. I had to hike far into the night to find a place out of earshot!

In the Regional Park Monti Picentini the Sentiero Italia follows the Fiume Sabato but the trail along its banks was completely eroded. No problem, I walked in the riverbed instead. But the amount of trash there was shocking. Between dozens of plastic sandals, shampoo bottles and bags I even found a computer keyboard. Not only had the river washed up all that trash, locals were also illegally dumping it into the park ...

I was now in an area where chestnuts are cultivated. This would be great places for camping but now in October farmers were harvesting them. A 1,100 meter straight ascent brought me up to Monte Polveraccio where it was so windy that I had problems taking pictures. I wonder how the Station of the Cross survived up here so exposed to the elements. Luckily I found a sheltered campsite on the descent. When I planned the next section I briefly considered taking the E1 again and realized just in time that it crossed the river Sele at a place where there is neither a bridge nor a ferry. No wonder nobody hikes the E1.

I stayed on the Sentiero Italia with lots of road walking and could not resist the temptation in Contursi Terme to get a hotel with a swimming pool! So much luxury for only 43 Euros - although the pool was not heated and pretty cold for my morning swim.

The Sentiero goes up Monte Panormo on a wonderfully maintained old foot path. I slept under chestnut trees and discovered that there casks are quite spikey. The view from Monte Panorma was downright breathtaking but I started to worry how I would get down from this knife edge. It turned out not too difficult but I I was still happy to touch firm ground again. 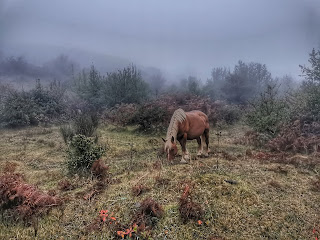 That night I learnt that cows and horses don't sleep at night. Their bells kept me awake until the wee hours and several times they came very close visiting me. I had booked myself in a B&B at Piaggine but check in nearly failed because there was no cell phone reception in town and I had to call the owner (who did not speak English either). In the end all worked out and I was even able to buy some food in the local minimarket before the deluge started. All the restaurants in town were closed and I had to dine in my room with a tetrapack of red wine.
Eingestellt von German Tourist um 03:17