Germany to Italy: Switzerland to Genoa

Because Switzerland is so expensive I had postponed my next rest day until Italy where I booked myself into a lovely room in Gavirate at Lago di Varese. Unfortunately this lake is so shallow and infested with algae that swimming is prohibited. No problem for me: I just lounged in my room basically doing nothing except recharching my batteries for the next stretch across the Po Valley which would definitely not be a walk in the park in the summer heat. At least I had my first real Italian pizza in Gavirate although there was no paper menu. You had to scan a QR code with your smartphone to get the menu ...

The walk across Po Valley was as bad as I had expected. I had already known at planning stage that hiking here in summer was bad timing - but this happens in a long-distance hike. The E1 first follows the river Ticino which is divided into three channels at Panperduto. One for ships, one for irrigation and the original river bed.
Unfortunately I now had to walk around Milano airport Malpensa where planes were landing and taking off almost 24 hours despite Corona. I fled into a hotel.
Next day was a lot of walking along the channels: No other hiker, but literally hundreds of cyclists on this dead flat concrete stretch. I was constantly changing channel sides to get at least some shade! Luckily I found a wonderful campsite close to Ticino river and could take an evening swim to wash off all the sweat and grime. I did not need any sleeping bag or blanket these nights - on the contrary it was hard to fall asleep because my skin was constantly itching and I was dripping with sweat even in the shade. 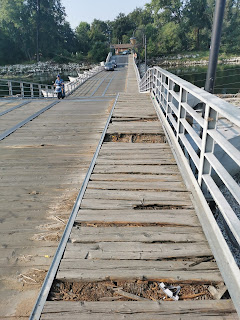 Beside the excessive heat two things were complicating the traverse of the Po Valley: First of all there are very few bridges across the rivers like Ticino and Po forcing the E1 into long detours on roads. The brigde across Ticino was a swaying ponton bridge made out of wood - half of the planks on the pedestrian side were rotten and broken ..
Secondly rice is cultivated in the Po Valley which need lots of water. I was walking along endless irrigation channels which could only be crossed on a few bridges forcing me to further detours in the relentless heat and humidity.
And walking along Scrivia river the trail disappeared into a jungle of blackberry bushes scratching up my arms and legs.
Worst situation happened when the E1 crossed a private property which was not only fenced off but guarded by dogs and video cameras. I tried to sneak around always ended up in front of "no entry"-signs. I finally just walked across and was not discovered. 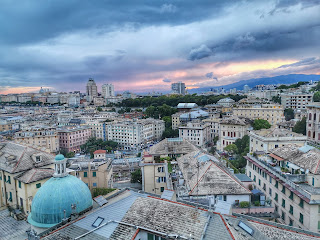 I had chosen the E1 in this section because the Sentiero Italia makes a huge detour across the entire alpine range. Now I was approaching the Alps myself and joined the Sentiero Italia on the Alta Via dei Monti Ligurii. God was I happy to see mountains again!
I took a train to Genoa where I spent two rest days. I was so lucky with my accommodation: It was on the top floor of an apartment building with a terrace running around it where breakfast was served in the morning. And this is the view from my breakfast table! Genoa is very hilly and very confusing with small winding streets but plenty of sights to keep me busy for two days.